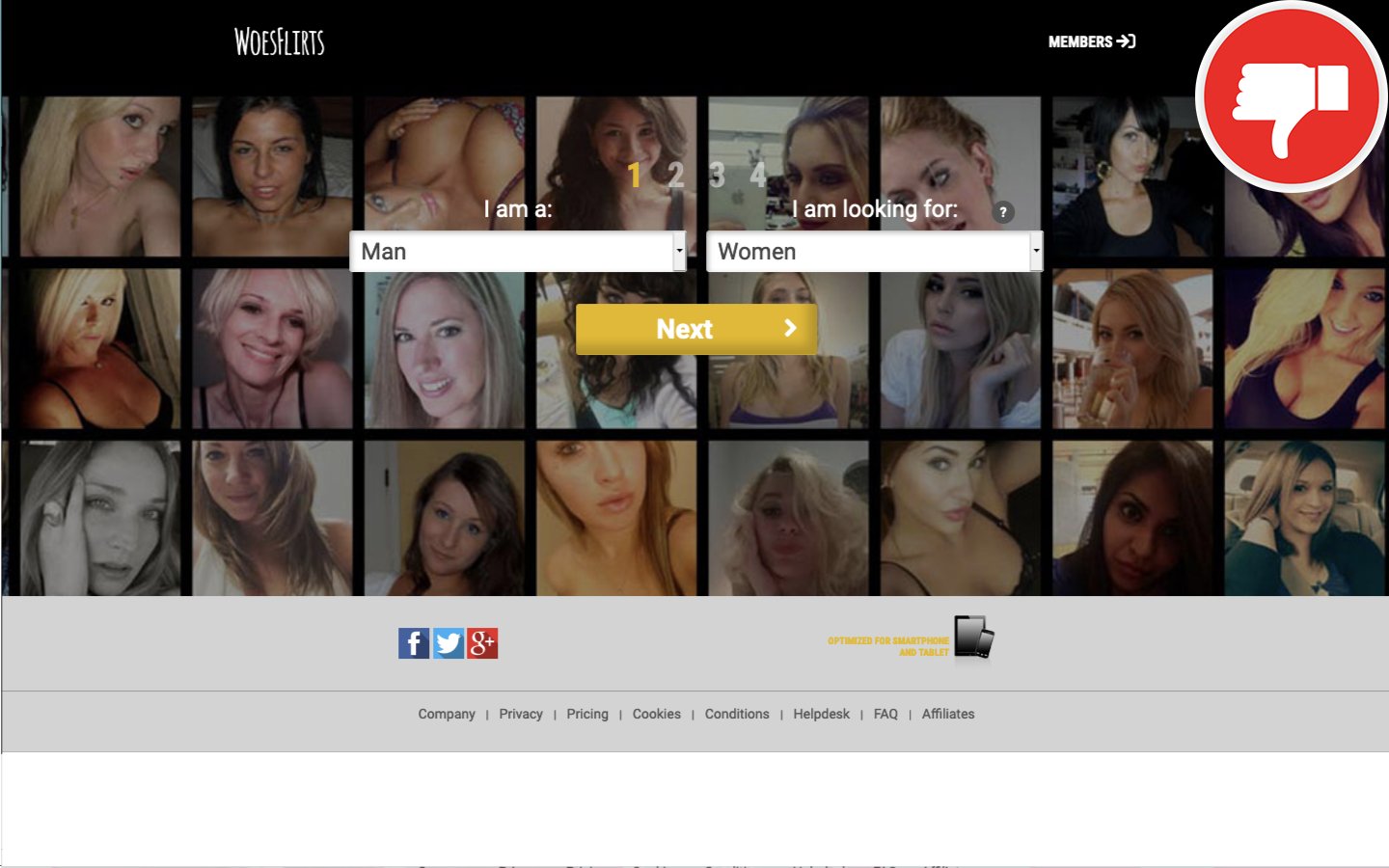 The fake profiles are managed by fake operators who entice the user to a conversation. But the user does not know about the fake chat. Plus, the user will have to pay to send messages. All messages only reach a fake operators’ fake profiles. This site is operated by Wakefield Web Activities B.V.

Scroll down to read the details of our WoesFlirts.com review.

Details on the WoesFlirts.com review

The online dating website WoesFlirts.com looks like a great choice on the first view. But after a little bit of research, we found out that this site is a terrible choice. On the landing page we see a lot of profile pictures. We could assume that those people are real members of the site. But we found many negative reports about the site. According to the details described by former customers, they are all fake.

This online dating portal is a rip-off with a fake chat. The profiles on the homepage and later in the members´ pool, are all fake. Moreover, the profiles are not just made up. A fake profile is managed by a fake operator.

The fake chat is mentioned in the terms and conditions

“5.2 WoesFlirts.com has entertainment as its goal, it is explicitly not the purpose of WoesFlirts.com to establish dates or meetings in person.
5.3 Wakefield Web Activities B.V. explicitly reserves the right to send calls on FlirtyMoms.com through self-created profiles. These are fictitious profiles with which no physical agreements are possible.”

The fake operators will get in touch with new members of the site. They will entice the user to a chat for which the user must pay.

All profiles on this site are fake

The fake operators will start a conversation. But they will not identify as a fictional person. A fake profile is marked with a heart symbol. In the terms and conditions, we read that these profiles show fictitious people. It is not possible to realize a date. According to the reviews from former customers, all profiles have a heart symbol. But the site does not explain to the user what the heart symbol stands for.

The new user does not know about the fake chat. The fake operators will try to generate as many messages from a customer as possible. A user will have to pay for every sent message. Costs will occur for credits which must be purchased beforehand.

Then the user will pay a lot of money to send messages to a fake profile. The chat will be with a fictitious person with whom a date is impossible. This site is operated by Wakefield Web Activities B.V. which is located in Deventer, Netherlands.

The conclusion from our WoesFlirts.com review

WoesFlirts.com is a rip-off with a fake chat. All profiles on this site are fake and managed by fake operators. The fake operators will get in touch with a new member via such a fake profile. A user does not know about the fake chat, as a fake operator will not identify as such. Here, money will be charged for a chat with a fictitious person, with whom a date in real-life is not possible.

Let us know your WoesFlirts.com experience in the comments as well.