The result of our MyLOL.com review: Our test on MyLOL.com turned out to be an sufficient dating website. 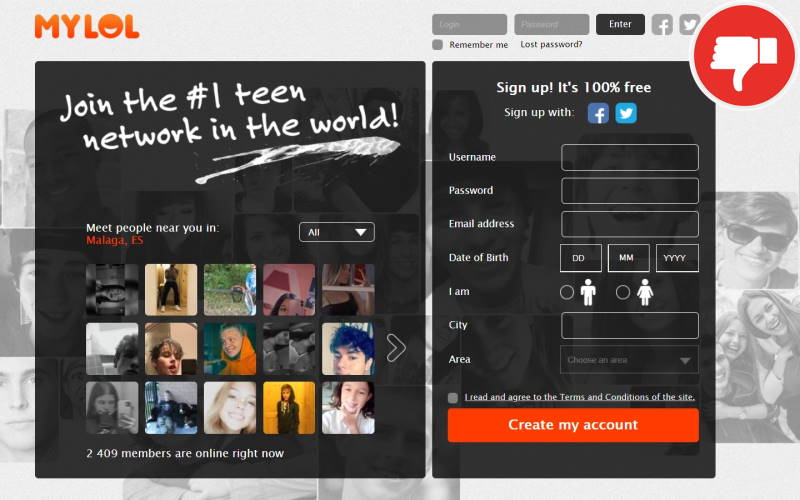 MyLOL.com advertises with a solid offer for teen singles. Here, people can register and meet others. But, we did some research on the internet and found some negative reviews. In general, the reputation of the site is very bad. Most of the former users had a bad experience. Now, the problem is not that this website is a scam. It is a high risk for its main users.

This portal is for teens who are looking for chat partners. With regard to the reports on the internet, the site is used by older people, also. On the internet, we read warnings from parents who were very concerned about the safety of their children. It seems that pedophiles and sadistic men are registered here. The operator of the site is MyLOL which is located in Quebec, Canada.

Scroll down to read the details of our MyLOL.com review.

Details on the MyLOL.com review

MyLOL.com shows some profile pictures on the landing page. There we see the screen for free registration as well. In general, the first impression is not too bad. Also, the offer sounds legit. This platform wants to be a place where young people can register and meet up. On the homepage, we read that teens are the target group of the site. With regard to the information on the platform itself, most of the users are aged between 13 and 19 years old. So, the first appearance is not too bad, but many things speak against the website.

This portal is not safe

The offer of the online dating website MyLOL.com may sound not too bad. But, we did some research and found a lot of negative reviews. Now, this website is not a rip-off. Or at least, that is not what most of the former users complain about. Well, the reports do not even come from the actual former users, but from their parents. This website is for teens. So, the target group of the website is between 13 and 19 years old. It is a fun age to chat with others. But, here, there are not just teens registered.

On the internet, we found plenty of reports about the platform. Parents of actual former users warn of this site. With regard to their impression, there are many pedophiles and sadistic men registered as well. That means that this website is not recommended. It is not safe for its actual target group. We read some reviews of concerned parents that explain that there was a high risk for their child. Now, that might not be the goal of the operator of the website. But, that is what most of the former users had to experience. The reputation of the site is terrible.

Now, as we said, the operator of the portal might want to offer a solid service. But, as there are too many older men with sadistic and hideous goals. So, as we see it, this website is not safe enough to allow it for your teen kid. It is not a scam at all. But, the operator of the platform missed the actual target market. However, costs will occur after the registration and the question of how teens should pay for the site's service anyway. Of course, registration and payment 'won't be worth time or money.

The image of the site on the internet is bad. It might be one of the worst cases that we had seen in the past. This website is not recommended to anyone. Former users were not just not happy with the service. Some of them were terrified, which was justified, when related to the experienced they described in their reviews.

The conclusion from our MyLOL.com review

MyLOL.com is an online dating portal that we can not recommend. With regard to the reviews on the internet, this website is a real danger for its users. Most of the members are teens who are visible by pedophiles and other sadistic people that use the platform for their own interests. The site might not be a scam with a fake chat or a subscription rip-off, but it does not change the fact that this website is not safe at all.

Let us know your MyLOL.com experience in the comments as well.