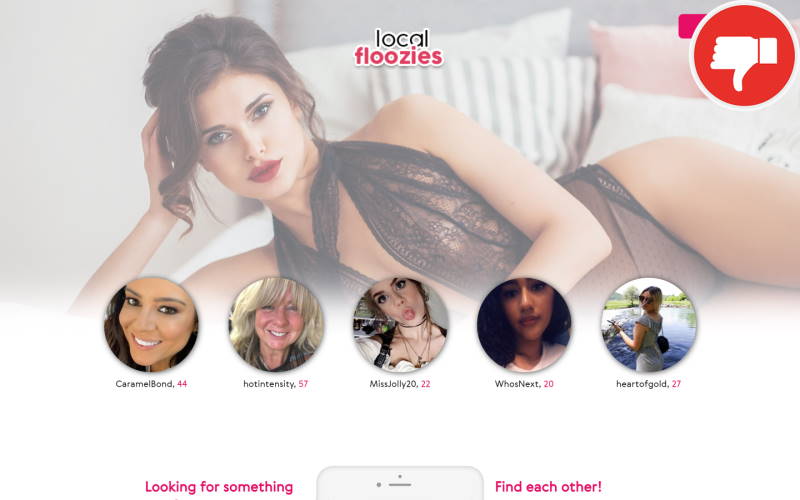 LocalFloozies.com shows some profile pictures on the landing page. Those profiles are fake and show fictional people. That is stated on the homepage, but at the very bottom. It is well-hidden. We did some further research and found many negative reviews about this site. In general, former users had bad experiences.

The operator of the site is Notify Direct Marketing BV, who are well known for a huge scam network. All sites work with the same tricks. It starts with misleading advertising. After the registration, fake chat operators will stimulate new users into a chat for which costs will occur. Since most users do not know about moderation, that makes it a rip-off.

Scroll down to read the details of our LocalFloozies.com review.

Details on the LocalFloozies.com review

LocalFloozies.com has a modern design and makes a solid offer. Free registration and a high number of members. We assume that this website has a lot of users as we see some profile pictures on the landing page. But the profiles on the landing page are fake. That is not the conclusion of our research. We found a statement on the landing page which explains the use of fictitious profiles. So, this website is a fake chat. Also, according to the reviews by former users on the internet, it is a rip-off.

However, the note on the landing page does not explain the full scale of the fake chat. Also, the fake chat is described as an “entertainment” service. That is quite irritating. As we see it, there are many users who did not see this statement or did not fully understand its meaning. The proof for our point of view is that there are many negative reviews on the internet. If more people knew about moderation, the reputation of the site would not so terrible. But former customers were disappointed.

We found the following statement in the terms and conditions

5.3 Notify Direct Marketing B.V. explicitly reserves the right to send calls on onlinequickie.com through self-created profiles. These are fictitious profiles with which no physical agreements are possible.

This portal has a bad reputation. The image of the operator of the site is even worse. The operator is Notify Direct Marketing BV, who are based in Krimpen aan den IJssel, in the Netherlands. This company runs a large dating network. All portals are a fake chat and the chances of finding one real match is zero. According to the information on the internet, it starts right after the registration. Fake chat operators stimulate new users into a chat for which high costs occur. But they will not identify as a fictional person.

The conclusion from our LocalFloozies.com review

LocalFloozies.com is a scam with a fake chat. The profiles on the landing page are fake and created for advertisement. Also, the profiles in the members´ pool are fake and managed by fake operators. It is not possible to find a real person here. So, the chance to realize a date is zero. But, that is what users suspect and pay for. Here, you will pay a lot of money to chat with moderated fictitious profiles.

Let us know your LocalFloozies.com experience in the comments as well.