The result of our Flingr.net review: Our test on Flingr.net turned out to be an insufficient dating website. 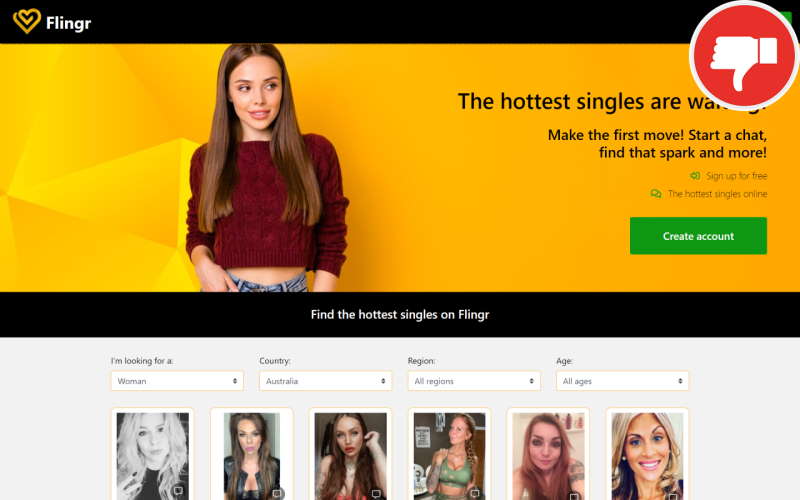 Flingr.net appears to be a solid online dating portal. Part of its offer is a free registration and a lot of fun. It seems that this site has got a chatty community. Well, that is not a positive aspect of this website. This platform is a scam with a fake chat.

The profiles in the members´ pool are fake and show fictional people. It is not possible to meet a real person here. Additionally, fake profiles are controlled by fake chat operators. Those fake operators will get in touch with a new member and animate them to a chat. To reply, costs will occur. With regard to reviews, former users did not know about moderation. The operator of the site is Flingr which is based in Breda, in the Netherlands.

Scroll down to read the details of our Flingr.net review.

Details on the Flingr.net review

The online dating portal Flingr.net has got a modern design. On the good-looking landing page, we see many details about the site. With regard to that information, registration is free for women and men. Also, the chance of finding a match is high. Plus, the community on the platform is open-minded. Further to the advertisement, you will find a lot of interesting people to chat with. That does sound promising, of course.

To join the site and find a match, you will need to register first. The process of Registration does not take too long, and only a few details are needed.

Do not join this site

Flingr.net might look like a normal online dating portal. But, it is not. This website uses fictional profiles, with which a date in real life is not possible. That is not the result of extensive research. But, it is noted on the landing page. The operator admits that fictional profiles are used for your entertainment. Well, it is fair of them to this note on the homepage.

However, the message about a fake chat is only provided at the very bottom. So, it is more hidden than really provided. Because of that, we can call this website a fake chat scam.

After the registration is done, a new member will receive messages from those fake profiles. The fake profiles are controlled by fake operators who animate new members to a chat. But, the fake chat operators will not identify as fictitious people. Also, a fake profile is not marked as such. In the end, users do not know about a moderated chat. They will assume that all profiles on the site are real and show actual people. However, the chances of finding even one real person on this site are low to zero, in regard according to reviews on the internet.

It is a fake chat

There is a specific purpose for moderation. The fake chat operators will animate members to a chat, for which costs will occur. As users do not know, this is clearly a rip-off. By sending a lot of messages to new users, they actively stimulate a conversation for which credits are needed. So, the goal of the fake chat is to increase the income of the operator.

We did some research on the internet. While doing that, we found many negative reviews about the site. Former users did not have a satisfying experience. Actually, they were very disappointed. They explain that the information on the landing page is misleading. After registration, fake chat operators will do the rest and scam the users. By the way, former users point out that the use of the site is quite expensive. A user has to pay for every sent message.

To cancel your membership and delete your profile, please contact customer support.

The conclusion from our Flingr.net review

The online dating site Flingr.net is a rip-off with a fake chat. In the members´ pool are fictional profiles only. Those fake profiles are controlled by fake chat operators. They will animate new members to a chat, for which high costs will occur. But, users do not know about moderation or that the chance of finding a match is zero.

Let us know your Flingr.net experience in the comments as well.