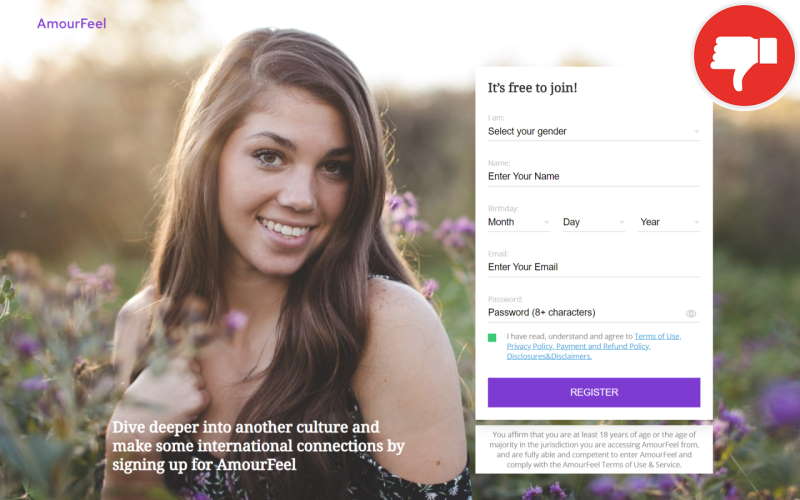 AmourFeel.com looks like a good choice at first. The landing page looks good, and the offer sounds great. Unfortunately, the website advertises with misleading information. The registration is free, but high costs will occur afterwards. Also, the site claims to have many members. In the end, the profiles are fake and controlled by fake chat operators. This site is a scam.

We did some research on the internet. Whilst doing that, we found a lot of negative reviews. Former users were not happy with this site. With regard to their impressions, all profiles are fake and controlled by fake chat operators. Indeed, this site is for entertainment only, which is a common expression for a fake chat. The operator of the site is Cellar Door Ltd, which are based in Gibraltar.

Scroll down to read the details of our AmourFeel.com review.

Details on the AmourFeel.com review

The online dating portal AmourFeel.com has got a nice appearance. On the good-looking landing page, we found some general information about the site and its offer. It seems to be a good choice for all singles. As we see it, casual dates and true love can be found here. At least, this is what the homepage leads us to assume. On the landing page, we read some general information about the offer. Plus, we see some profiles pictures. We assume that those images show actual members of the site. Registration is free for women and men.

This site is for entertainment only

AmourFeel.com has got a modern design and a nice appearance. But, the reputation of the online dating portal is poor. On the internet, we found many negative reviews. Former users were not happy at all and shared their experiences. According to their reports, all profiles are fake. Now, we checked the legal information of the site. It only took a few minutes until we found proof of a fake chat scam. This site is for entertainment only. In general, entertainment is a common synonym for moderation. It sounds much better than fake chat operators and less suspicious, of course.

Anyway, a dating portal is not for entertainment. Usually, a dating website connects matches. Here, the goal of the site is your entertainment, which is limited to an online experience. It is not possible to meet other members of the site in real life. All profiles are fake and show fictional people. Of course, it is not possible to meet fictional people in real life. However, the fake profiles are not marked as such. Additionally, fake operators control those fake profiles. They will actively start a chat, but they will not identify as fictitious people, either.

Any statement that may be posted on the Service is for informational and entertainment purposes only and is not intended to replace or substitute for any professional financial, medical, legal, or other advice.

The scam starts right after the registration. After a few minutes, a new member receives the first messages. Those messages come from fake operators and their fictional profiles. But, users do not know about moderation. As we see it, it is a cheeky rip-off with a fake chat, as even the legal information contains synonyms for moderation only.

We did some research on the internet. In general, the reputation of the site is bad. Also, the image of the operator of the site is worse. This company is well-known for other dating sites that employ fake chat as well. Anyway, former users note that they did not suspect a fake chat. They explain that the actual purpose of moderation is not entertainment. Fake chat operators get in touch with members to increase the income of the operator. A user has to pay for every sent message.

To cancel your membership and delete your profile, please contact customer support.

The conclusion from our AmourFeel.com review

AmourFeel.com is a rip-off with a fake chat. In the members´ pool, there are only fake profiles. Fake chat operators control the fake profiles to entertain you. Of course, users do not seek entertainment. Anyway, fake operators will animate to a chat, for which costs will occur. Credits are needed to send messages, which are not cheap, according to reviews on the internet.

Let us know your AmourFeel.com experience in the comments as well.