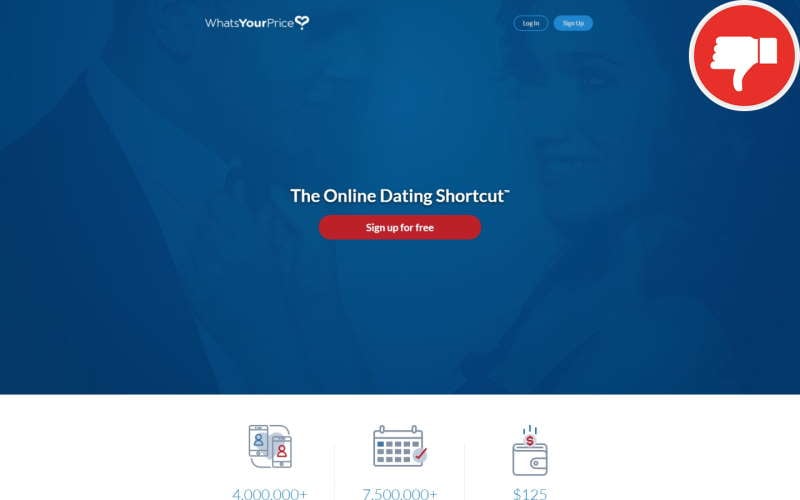 WhatsYourPrice.com does not show a lot of information on the landing page. So, we did some research on the internet. This way, we found many negative reviews from former users. According to their experiences, this site is a cheeky scam with a fake chat and a subscription trap.

Fake profiles are controlled by fake chat operators. They animate new members to a chat, but they will not identify as such. This way, they stimulate users to purchase a premium membership, which will extend automatically. In the end, the paid membership is a subscription rip-off. Here, the operator makes the termination difficult. The operator of the site is W8Tech Cyprus Ltd who are based in Nicosia, Cyprus.

Scroll down to read the details of our WhatsYourPrice.com review.

Details on the WhatsYourPrice.com review

The online dating platform WhatsYourPrice.com offers free registration. On the landing page, we did not find much information about the site, but we do know that this is some kind of matchmaking site. But, the target group are wealthy people who are looking for simple casual dates. Here, men can register and find a woman to date.

We get the impression that it is an escort platform. Well, it also seems to be a professional and successful one. On the homepage, we read that this site has got more than four million active members in the UK, which is a lot.

This is not a dating site

WhatsYourPrice.com claims to make online dating easy again. Here, wealthy men can register to find a match. In general, the website appears to be an escort service. We got this impression because of the information on the landing page and the name of the site. Now, the operator of the site claims that you will find a match here in a short time. That sounds great, of course. But, after we did some research on the internet, we had to change our point of view. This portal is not trustworthy, according to reviews from former users.

In a nutshell, former users explain that the profiles in the members´ pool are fake. Also, those fake profiles are controlled by fake chat operators. Now, that is a strong accusation. However, this website is for entertainment only. That is a synonym for moderation, and it is noted in the legal information. So, it seems that the reviews from former users speak the truth. Also, they explain how the scam works. It starts right after the registration. Then, a new member will receive many messages from other profiles. Those messages come from fake chat operators and their fictional profiles.

In addition to the preceding information under this Agreement, any advice or thoughts that may be posted on the Website or through the services provided for under this Agreement are for informational and entertainment purposes only and are not intended to replace or substitute any professional, financial, medical, legal, or other advice.

High costs for nothing

The fake operators try to animate new members to a chat for which costs will occur. A user does not know about moderation. A fake chat operator will not identify as a fictional person. Their fake profiles are not marked as such. In general, entertainment is a bad sign. A dating portal is not for entertainment. It is a service that solidly connects matches. Here, you will pay virtual entertainment only. Often the operator will note a fake chat scam but not call it by its name.

On the internet, this website has got a poor reputation. Former users were not satisfied at all. According to their reviews, high costs will occur to chat. However, the chances of finding a real match are low to zero. Plus, the premium membership appears to be a trap. Former users note a rip-off with a subscription trap. The operator makes the cancellation difficult. This way, the subscription will renew over and over again. In the end, the user will pay a lot of money to be entertained but assumes they are chatting with a real person.

The conclusion from our WhatsYourPrice.com review

WhatsYourPrice.com is a rip-off with a fake chat and a subscription trap. After the registration, a new member will receive messages from fake operators who won´t identify as such. Plus, high costs will occur for the use of the site. A premium membership is needed, which is not just useless because of the moderated chat. But, the subscription is a cheeky trap as well.

Let us know your WhatsYourPrice.com experience in the comments as well.