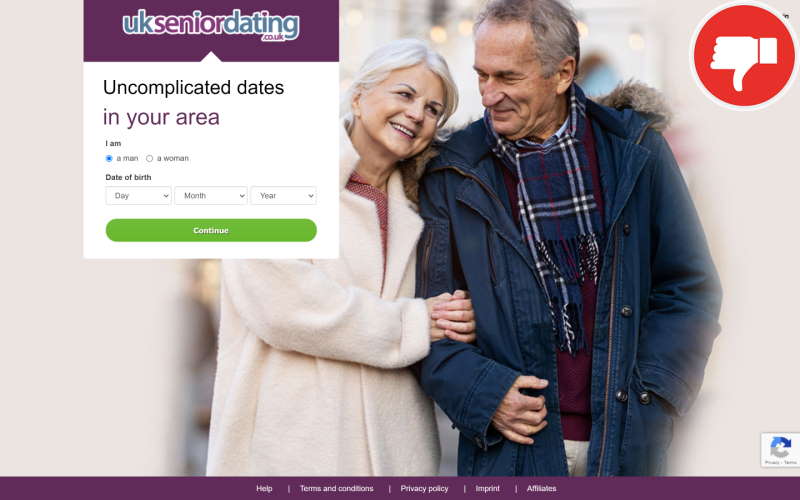 The dating platform UKSeniorDating.co.uk is aimed at seniors who are looking for uncomplicated dates in their local areas. The purpose of this website is to connect mature people who are willing to find a partner for new, exciting experiences. The landing page invites all the readers to join the community and start the quest for their ideal match. We all know that age shouldn't stop anybody from searching for love, and it's remarkable that there are dating websites specifically designed for elder people.

Unfortunately, UKSeniorDating.co.uk is not a safe choice. This portal is in fact a scam with a subscription trap. The company responsible for this rip-off is named Qualidates AG and is headquartered in Steinhausen, Switzerland. In the past, we have already written several reviews about their untrustworthy dating platforms. Moreover, the internet is full of reports from past users that suggest being wary of this dating service.

Scroll down to read the details of our UKSeniorDating.co.uk review.

Details on the UKSeniorDating.co.uk review

We can say with confidence that when a dating website doesn't provide any information on their initial page, chances are that it will turn out to be a scam. To confirm our initial suspects, we created a test profile, we carefully read the Terms and Conditions and scanned the internet looking for former users' reviews. We couldn't find anything significant about UKSeniorDating.co.uk. However, we came across a multitude of testimonials from people that have previously signed up for other websites run by the same operator.

A huge network of scams

Qualidates AG is the Swiss company based in Steinhausen that is responsible for UKSeniorDating.co.uk. Over the years, they have received countless negative reviews on the internet. The most common source of criticism has to do with their paid subscriptions, which many people define as a trap. All the subscriptions renew automatically, which is nothing bad as long as the cancellation policy is fair and simple. Unfortunately, this is not what happens on the websites run by this operator.

To avoid recurring charges, a paying subscriber has to send a cancellation request at least 14 days before the expiration day. This company is infamous for rejecting all the requests without even giving a valid reason. Therefore, we suggest our readers not spend any money on UKSeniorDating.co.uk because of the risk of becoming victims of a subscription rip-off.

The conclusion from our UKSeniorDating.co.uk review

UKSeniorDating.co.uk might look at first as the perfect place to give love another chance, even at an older age. But what seems to be a safe and effective dating website is actually nothing more than a scam. Users are asked to upgrade to a premium membership if they want to get access to even basic features such as sending messages. But these subscriptions are a trap because they renew automatically, and it is almost impossible to terminate the contract.

Let us know your UKSeniorDating.co.uk experience in the comments as well.