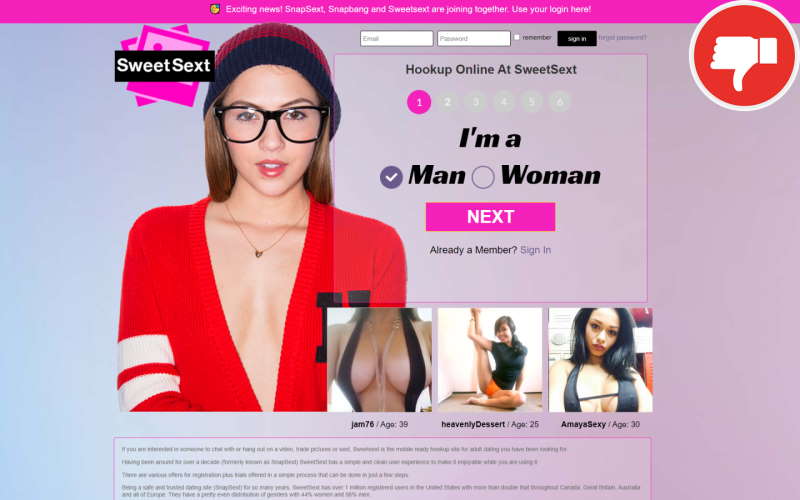 According to the information on the internet, this website is full of fake profiles. Legal proof is missing, but there are many clues which suggest that. Also, this site uses ice-breaker messages. These are used to persuade new members to make a purchase. The premium-membership will extend automatically and end in a subscription rip-off. This site also lacks data protection. The operator of this platform is Global Personals, LLC. This company is based in Florida, in the USA.

Scroll down to read the details of our SweetSext.com review.

Details on the SweetSext.com review

The online dating portal SweetSext.com appears to be a solid choice. On the landing page, we see a lot of images of attractive women. This site seems to be full of open-minded members who have only one thing on their mind. This site offers free registration for everyone. The process of registering is completed in a few steps. In just a few minutes, you can be an active member and start chatting. As we see it, the chance of meeting matches and date them is high. It seems that you can find one casual date after another.

This site is a bad choice

The Site may, from time to time, offer an automated message system for users to contact other users that meet at least one interest that the user is interested in.

Do not waste your time or money here

The ice-breaker messages play an important role to scam users. Users will be stimulated to buy a premium-membership which will extend automatically. That does not have to be a problem. But the operator of the site makes the termination difficult. The operator of the site does not offer a lot of information about termination. However, details about the operator are also missing. Last, but not least, we found many clues about a lack of data protection. Your profile and all your personal information will be shared on a dating network.

This site has a bad reputation on the internet. Former users claim a fake chat scam. The messages are actually “ice-breakers,” which is mentioned in the legal information. Fake profiles are mentioned in reports as well. Those profiles are real, but they are part of the dating network. Because of the lack of data protection, the profiles appear to be fake. Anyway, the chances of meeting a real person here is likely to be zero. That is our impression, and the conclusion in reviews from former users. We also found many complaints about a rip-off with a subscription trap.

To cancel your premium-membership, please contact the customer support

The conclusion from our SweetSext.com review

SweetSext.com is a rip-off with a subscription trap. This site lacks data protection. Also, this site is part of a big network. If you register here, your profile will be visible on all sites. Plus, ice-breaker messages will be sent from your profile. You will also receive ice-breaker messages which are not marked as such. So, users are lured into a subscription trap.

Let us know your SweetSext.com experience in the comments as well.