The result of our SoCougar.com review: Our test on SoCougar.com turned out to be an insufficient dating website. 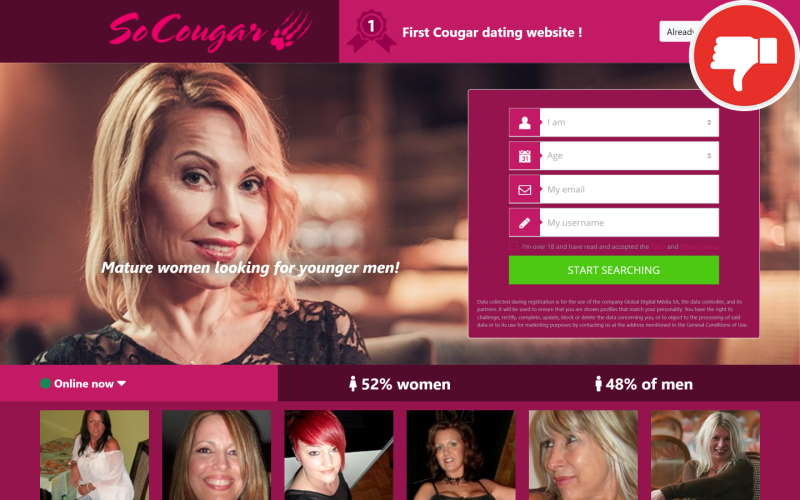 SoCougar.com is a dating platform specifically designed for mature women looking for younger men interested in casual sexual encounters. The website guarantees users will have access to thousands of members online every day. It offers all the ingredients for a successful dating experience. But our research will show you that SoCougar.com is not a trustworthy portal.

This platform is just a trap with a subscription rip-off. Users are lured into purchasing a trial membership that proves impossible to cancel. The affordable two-week plan will always turn into a much more expensive monthly subscription. The company responsible for this scam is Global Digital Média SA. It is registered in Genève, Switzerland. This operator has a bad reputation, which is the result of countless negative reviews it has received over the years.

Scroll down to read the details of our SoCougar.com review.

Details on the SoCougar.com review

The landing page of SoCougar.com has obviously been designed by someone with plenty of experience in the online dating industry. Despite its simplicity, it has all the features needed to attract thousands of potential users. It displays a preview of promising pictures of some of its latest members. They all look like genuine people available for exciting encounters.

Moreover, it states that 52% of members are women. This kind of platform usually has a poor gender balance, with a lot more males than females. That's why women normally receive hundreds of messages every day, while men hardly get any attention. The fact that SoCougar.com claims it has more female users makes this website irresistible to anyone looking for an effective dating platform.

Within minutes of our registration, our mailbox is already full of cheeky messages from naughty ladies inviting us to start chatting. The problem is that to reply to these messages, we would need to purchase paid membership. It looks as though these women are just trying to pressure us into spending money on the website. Our suspicions are partly confirmed in the negative reviews we read online. Many former users accuse this operator of using fake chat to deceive its customers.

Although definitive proof of the scam is missing, the possibility that SoCougar.com uses fake profiles is real. Otherwise, there would be no explanation for the number of messages we received in such a short time, especially since our profile doesn't even contain a picture.

In any event, we strongly advise against spending money on this platform. As is always the case with every single website run by the Swiss operator from Genève Global Digital Média SA, the subscriptions are a rip-off. This is especially the case with the two-week trial plans which, unless they are cancelled by users, will automatically become monthly membership subscriptions. But the notice required for the termination of a subscription contract is 14 days in advance, which of course makes cancellation physically impossible.

The conclusion from our SoCougar.com review

Each time we encounter this company, we prepare ourselves for a huge disappointment. Its nasty reputation doesn't leave any room for doubt. All its dating websites are dangerous places where users are at risk of becoming victims of a subscription rip-off. SoCougar.com isn’t any different. Moreover, there are strong suspicions that many profiles in the members' area are fake. Not only are the paid membership subscriptions a trap; it is also not possible to arrange any real-life date here.

Let us know your SoCougar.com experience in the comments as well.