The result of our Recon.com review: Our test on Recon.com turned out to be an insufficient dating website. 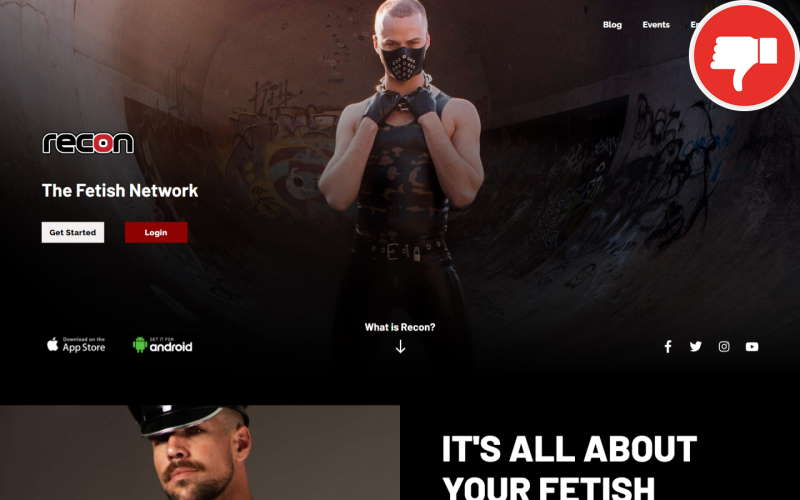 Recon.com advertises with an interesting offer, and the landing page offers some information. In general, the website appears promising. But on the internet, this platform has got a poor reputation. Former users complain about fake profiles and fake messages. It seems to be a fake chat, but the proof is missing.

Well, that does not mean that this site is safe. We found some reviews about another kind of scam. After the registration, costs will occur for a premium membership that continues until it is actively terminated. This is the actual problem, as the operator makes the termination difficult. The premium membership ends in a subscription rip-off. This site is operated by Avaland House, which is based in Herts, United Kingdom.

Scroll down to read the details of our Recon.com review.

Details on the Recon.com review

The online dating portal Recon.com has got a solid first impression. This website has got a modern design and advertises with a promising offer. Here, gay men who have a fetish can register. It seems that more than just one fetish can be found here. On the landing page, we see some images of men in bondage clothes. Also, we found some general information about the site. Now, we know that registration is free and only takes a few minutes. Also, it seems that the chance to meet interesting people is high, thanks to a high number of members.

Recon.com appears to be a promising casual dating website for men. But, we did some research on the internet and found many negative reviews about the site. In general, most of the former users had a bad experience. With regard to their impressions, they report the members´ pool is filled with fake profiles that are controlled by fake operators. We found many reports about a scam with a fake chat on the internet. But, we did not find proof in the legal information.

The operator of the site does not mention fake profiles or fake chat operators in the terms and conditions.

A few sources on the internet mention a computer program that entices new members to a chat. The messages animate users to make a purchase. This is a common trick to lure new users into a trap. We checked the legal information and found out that costs will occur for a premium membership. So, the free registration is a misleading piece of information. As we see it, that is the first part of the actual rip-off. It seems that the subscription for the paid membership is a cheeky trap. It will renew automatically, which is not a good thing here.

Now, automatic renewal of a subscription does not have to be that bad, but in general, this is a customer-friendly function to ensure permanent use. But, it can be used as a trap as well. According to the reports on the internet, this is the case here. Also, there are some indications of that on the site itself. For example, misleading and confusing information, like free registration. By the way, some images on the landing page look like they are fake. All signs indicate an unreliable website.

On the internet, this website has got a poor reputation. Former users were not happy with the service. We read about fake profiles that seem to be moderated. Also, the price-performance ratio is generally poor. Plus, many people felt trapped in a permanently renewing membership. The internet community warns of the site and claims it is a scam. With regard to reviews, a new member will receive many messages that animate to buy a premium membership. If the purchase is made, the trap will snap closed.

The conclusion from our Recon.com review

Recon.com is a rip-off with a subscription trap. Also, we found many reviews about fake chats. It seems that fake profiles are used to animate users to make a purchase. A premium membership is needed to get in touch with other members. But, the subscription renews automatically, which is used as a trap here. Plus, the chance to meet a real person is likely zero, according to information on the internet.

Let us know your Recon.com experience in the comments as well.