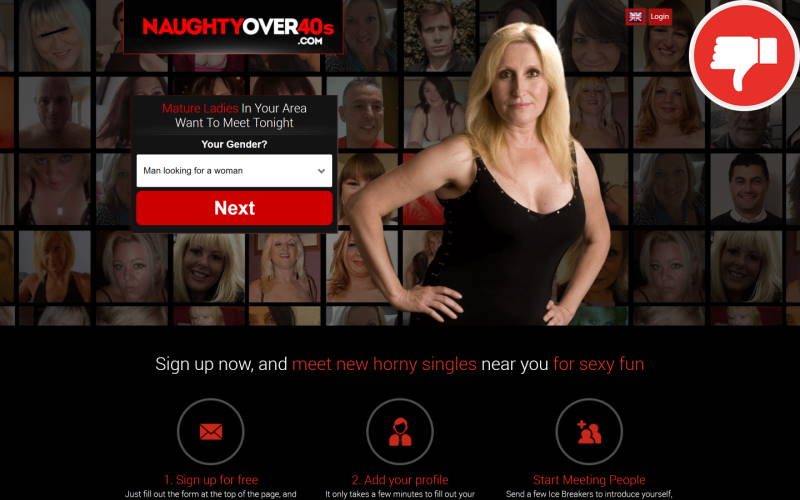 NaughtyOver40s.com claims to be a solid casual dating site for middle-aged singles. But that is not true, according to reviews on the internet. We found a lot of negative reports. The operator of the site especially receives a lot of criticism for a lack of data protection.

This website is part of a huge network with more than 3,500 dating sites. If you register here, your profile is visible on all sites. We also found a lot of hints of a scam. Former users had the experience of a fake chat. So, the profiles are fake and managed by fake chat operators. Additionally, costs will occur for a premium-membership which seems to be a subscription rip-off. Venntro Media Group Ltd is the operating company who runs this site.

Scroll down to read the details of our NaughtyOver40s.com review.

Details on the NaughtyOver40s.com review

The online dating website NaughtyOver40s.com offers free registration. It seems to be a good choice for people who are looking for casual fun with people over 40. However, it does not matter what you are looking for, you will not find it here. This website is part of a huge network which has a lot of negative reviews from former users. The operator of this site is Venntro Media Group Ltd, who are based in Slough, United Kingdom. This company runs the network and is known for rip-offs and lack of data protection.

The network includes more than 3,500 dating sites. All categories are represented there. There are casual dating sites, matchmakers, fetish, and gay dating websites. All of them are scams. Former users explain that the members´ pool is filled with fake profiles. The lack of data protection is one reason why some profiles appear to be fake. But we also found many hints for a fake chat. So, there are some profiles which are created by operator and controlled by fake chat operators. They stimulate new users into a chat for which costs occur.

This site is not worth your money

According to the reviews on the internet, it starts right after the registration. At this point, a new user will receive a lot of messages from other profiles. Those seem to show fictional people, but they are not marked as a fake. Also, fake chat operators will not admit that they act as a fictional person. So, they lure users into a conversation for which a paid membership is needed.

The subscription for the premium-membership will extend automatically, if it is not terminated in time. In this way, new members of the site will be lured into a subscription rip off.

The conclusion from our NaughtyOver40s.com review

NaughtyOver40s.com is a scam with fake chat and a subscription trap. The profiles are fake and controlled by fake chat operators for your “entertainment”. That is how the operator explains the service of the site. This operator is well-known for a huge dating network with more than 3,500 dating sites and they receive a lot of criticism for a lack of data protection.

Let us know your NaughtyOver40s.com experience in the comments as well.