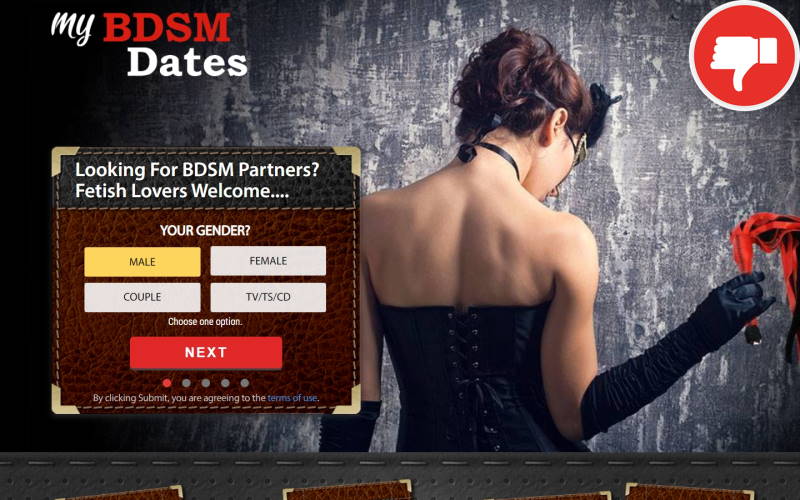 MyBDSMDates.com advertises with a solid offer. Free registration and a high number of active members. Sounds great, but the information on the landing page is misleading and wrong. The profiles of the website are fake and controlled by fake operators. It is a scam with a fake chat and a subscription trap.

The fake operators stimulate new users to a chat, for which costs will occur. A premium-membership is needed to read and send messages. Of course, the subscription is worth a Penny. However, it will renew automatically, if it is not cancelled in time. That is used as a trap. The operator of the website is Arnaze Online Ltd and well-known for that. We found many negative reviews about the company.

Scroll down to read the details of our MyBDSMDates.com review.

Details on the MyBDSMDates.com review

The online dating portal MyBDSMDates.com shows some erotic content on the landing page. Also, the name of the site sounds promising. Well, it is not how it looks like. According to the reviews on the internet, this website is not good at all. Former users were not satisfied and explain their bad experience. They describe this website as a cheeky fake chat. Indeed, this platform is for entertainment only. That is a common synonym for a rip off with a fake chat. Also, the operator of the website does not mention fake operators or fictional profiles in the legal information.

But, the operator admits that the content of the portal might not be real. This and the note about the entertainment purpose is enough proof. Also, the reviews on the internet speak a clear tongue. Additionally, we know the operator of the portal already. The operator is Arnaze Online Ltd which is based in Douglas, Isle of Man. This company got a poor reputation on the internet. It runs much more dating sites, this is just one out of many. The tricks are always the same. It starts with misleading advertisement. After the registration, fake operators come into the game.

By using this Website you acknowledge that any User profiles, messages and communication may not be genuine.

A fake chat and subscription trap

The fake operators will stimulate new users to a chat for which costs will occur. Of course, the user does not know about moderation. That is all part of the scam. If the user wants to reply, an expensive premium-membership is needed. Also, cheap trial membership is offered which appears to be the better deal. But, according to the reviews on the internet, that is the actual subscription rip off. It can not be canceled in time. So, it will renew automatically, just like a normal premium-membership as well. That is the cheeky rip off the operator is known for.

The conclusion from our MyBDSMDates.com review

MyBDSMDates.com is a scam with a subscription trap and a fake chat. This website is for entertainment only, as the operator explains it. We call it a fake chat. The purpose of moderation is to stimulate new members to a chat for which costs will occur for a paid membership. A cheap trial membership is offered as well which is the actual trap, according to the information on the internet.

Let us know your MyBDSMDates.com experience in the comments as well.