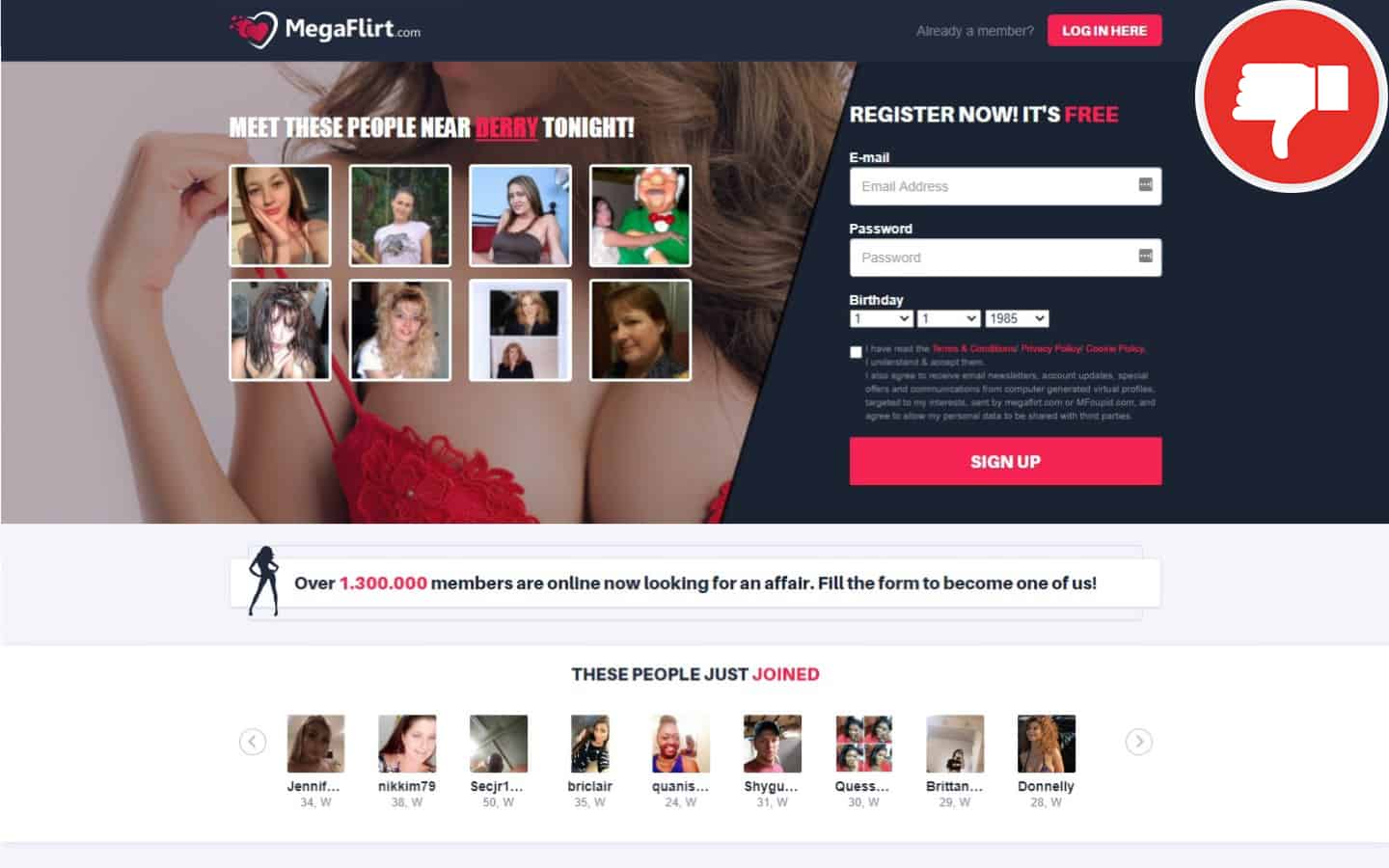 Already the name of the website MegaFlirt.com sounds very promising. But it turns out that you will be very disappointed here. Having a chat here is possible, but nothing more as this website is a scam with a fake conversation. On this portal are fake operators that operate fake profiles. They will entice the user to a chat and to get a paid membership.

It is where the rip off continues. The subscription for a paid membership will extend automatically. It appears that it is a trap. MegaFlirt.com is operated by the Safe Escape Limited, a company with a bad reputation on the internet.

Scroll down to read the details of our MegaFlirt.com review.

Details on the MegaFlirt.com review

The landing page of MegaFlirt.com looks good on the first impression. But some things appear to be untrue to us. Like the number of active members. This website claims to have more than one million active users. That means that this website is one of the most used dating portals in the UK.

But while our research, we did not found too many details about this platform and the once we found were not good. We found a few reports of former customers that complain about a fake chat. It seems like this website is full of fake profiles. But not just any fake profiles.

Fake operators operate the fake profiles on this website. That means in return that this website advertises with wrong and misleading information. The number of active members is false, just like the profile pictures that are on the landing page. A fake operator has a particular purpose.

“we may post fictitious profiles, generate or respond to communications using automated programs or scripts that simulate or attempt to simulate your intercommunication with another real human being (though none exists and any dialogue is generated by programming), and we may employ or contract for the paid services of real persons who may interact with you as part of their compensated employment.”

If a fake operator stimulates a user to a chat and the user does not know about a fake conversation, it is a rip-off. Uniquely because the fake operator will not identify as a fictional person and the fake profile is not marked. More, the fake operators will entice the user to get a paid premium membership.

Here we come the point where the scam happens. The fake operators will get in touch with a new member by sending messages to the user’s profile. This way, they entice the user to a chat, but if a member wants to answer a paid premium-membership is needed. The subscription will extend automatically if the termination is not cancelled on time. That is a trap and a cheeky rip-off. This website is operated by the Safe Escape Limited, which is in Essex, in the UK.

The conclusion from our MegaFlirt.com review

The online dating website MegaFlirt.com is a scam. It is a fake chat and a subscription trap. In the member’s pool are fake profiles that are operated by counterfeit operators. The fake operators will entice the user to a chat and get a paid membership. The subscription for that membership will renew automatically.

Let us know your MegaFlirt.com experience in the comments as well.