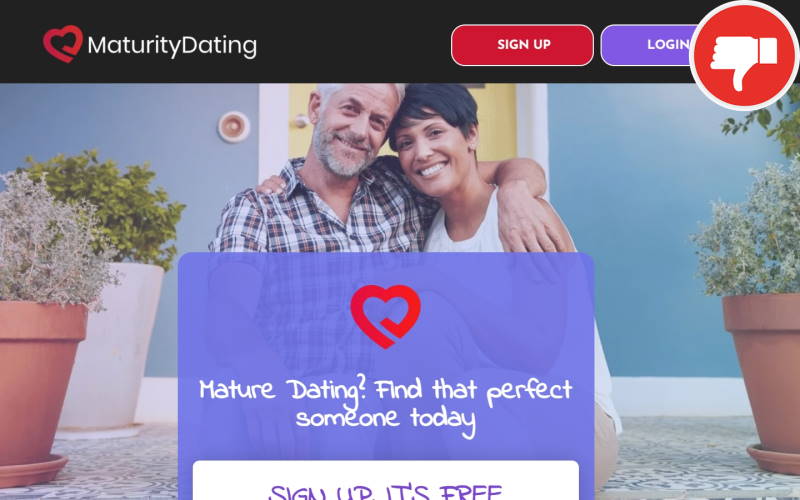 MaturityDating.co.uk claims to be a solid choice for older singles who are looking for love. But, with regard to the reviews on the internet, this website is a high-risk site. Former users had a bad experience with the site and reported a scam. We found reports about a fake chat and a subscription trap. Last but not least, the operator has got a terrible reputation for unsecure data protection.

The operator of the site is Venntro Media Group Ltd, a company who we already know very well as well. This brand runs a dating network that counts more than 3.500 different sites. Now, if you register on just one site, your profile plus all personal information will also be visible on all other portals. Of course, that is not good at all. Plus, the sites already have a reputation of being a rip-off.

Scroll down to read the details of our MaturityDating.co.uk review.

Details on the MaturityDating.co.uk review

The online dating portal MaturityDating.co.uk might look like a normal site, but it is not recommendable. On the internet, we found many negative reviews about a scam. Former users explain that the members´ pool is filled with moderated fake profiles. Plus, the subscription for the premium membership appears to be a trap. That does not sound good at all. But, there is still more that you should be aware of.

The operator of the website is Venntro Media Group Ltd which is based in Slough, in the United Kingdom. This company runs a huge dating network that counts more than 3,500 sites in all categories.

The biggest problem is leaking data protection. As the operator claims, your profile will be shared on other sites to increase your chances of finding a match. But, that is nonsense as other websites in the network aim for a completely different target group. Now, MaturityDating.co.uk is a matchmaker for older singles. Other websites in the network are casual dating and fetish sites. First, those sites do not increase your chances of a match. Second, there might be some platform on which you would never register. So, unsecure data protection is terrible, which indicates some fake profiles, but not all.

The operator explains that this website is for entertainment which is a common synonym for a fake chat. Also, we found many negative reviews about moderation. Former users claim that the fake profiles are controlled by fake operators as well. As we see it, that seems to be the case here. But, its goal is not your entertainment. Fake operators try to increase the income of the operator. Costs will occur for a premium membership that will extend until the user actively cancels it. With regard to a few reviews, the membership will end in a subscription rip-off.

The conclusion from our MaturityDating.co.uk review

MaturityDating.co.uk shows all the signs of a rip-off. This website is for entertainment only, which is an often-used synonym for a fake chat scam. Plus, the subscription for the paid membership extends automatically if it is not cancelled in time. Further to reports, it is a cheeky trap. Moreover, this website is part of a huge dating network that is well-known for unsecure data protection.

Let us know your MaturityDating.co.uk experience in the comments as well.