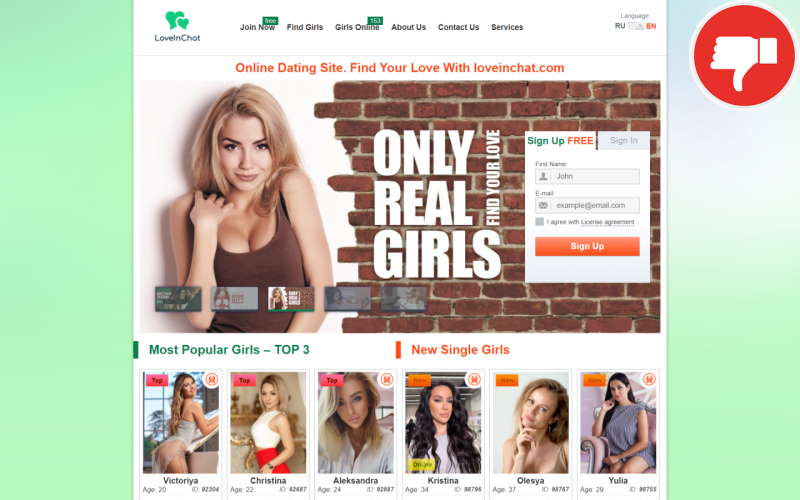 LoveInChat.com is an online dating site exclusively for men, that is also why you can see many attractive women on the landing page. You also get to chat with female members like the ones featured here after signing up for free. The models on here are however not sincere, we even have enough reason to doubt that their profiles and all their messages are real. This site turns out to be a fake chat scam.

We came across the operator of LoveInChat.com before. Mirrana Corp SRO makes using the chat very expensive. The company from Prague sells virtual credits that are needed to pay for sending chat messages. All the ladies on here are very keen on chatting with us. In fact, the operator wants them to do so in order to increase our expenses on the site.

Scroll down to read the details of our LoveInChat.com review.

Details on the LoveInChat.com review

LoveInChat.com promises that all the girls on here are real. On the landing page we can see a few of the female members, all of them are stunningly beautiful. We are being told right away that using some functions costs money. Many scam dating sites prefer to keep information like that secret on the landing page. Nonetheless, this site is a rip-off, which has something to hide. The users don’t stand a chance of arranging a real date. The women on here are mostly professional models, some of their messages are not even real.

Too many fake messages

We decide to sign up and don’t have to wait very long for the first messages to arrive. In fact, we already discovered several messages in our inbox right after finishing the registration. Apparently, several attractive female members are very interested in a flirt and decided to send us various messages. This seems more than suspicious. We suspect that these messages are generated and sent to every user in order to advertise for the expensive chat function.

Nothing is for free here

We try to answer one of the many messages we received but fail to do so. Before we can send messages in the chat, we have to purchase credits in the shop. Since you start with zero credits, you can’t get anywhere without paying at least some money. The female members ask many questions, as if they want you to spend a lot of money in the chat. There is no proof for it, but everything about the other profiles seems fake.

LoveInChat.com is just another fake chat scam where moderated fake profiles are used to seduce the users in the expensive chat.

The negative reviews online say it all

The conclusion from our LoveInChat.com review

Unfortunately, LoveInChat.com could not meet our expectations. There are numerous good-looking female profiles, but they are either fake or professional models who only want you to spend a lot of money on this site. We are not surprised to find various reviews written by users who share their negative experiences with the site online.

Let us know your LoveInChat.com experience in the comments as well.