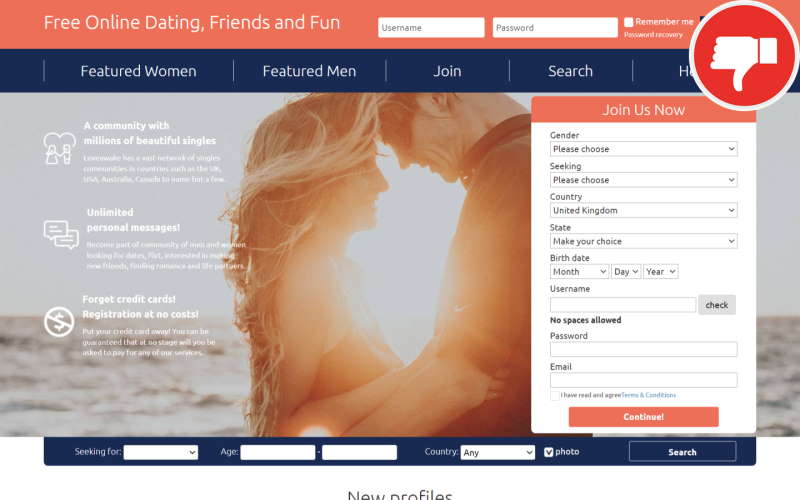 LoveAwake.com offers a lot of information on the landing page. We read about the solid offer on this online dating portal. It seems to be a good choice. But on the internet, we found mixed reviews. Some former users were happy and made a positive experience. However, we also found plenty of negative reports. Some former members mention a rip-off.

During our research, we tried to find further information about the operator of the site. The operator of the site is LA Media, Inc. Their whereabouts is unknown. In the terms and conditions, no more details are given. That is not a good sign. However, we found one statement which might stand for a fake chat scam. In the end, we can not recommend this website.

Scroll down to read the details of our LoveAwake.com review.

Details on the LoveAwake.com review

LoveAwake.com advertises with a solid offer. The registration is free and completed in a few minutes. Then, a new member can enjoy all the great advantages of the site. This online dating platform seems to have a huge community. More than one million singles seem to be registered here already. Also, the matchmaker algorithm of the platform seems to work solidly. At least, we read some positive testimonials on the homepage. Additionally, this site advertises with profile pictures on the landing page. They suggest a high number of diverse members.

LoveAwake.com gives a good first impression. The offer sounds convincing. Also, on the internet, we found some positive reviews about the site. This website claims to be a trustworthy matchmaker and shows positive testimonials on the landing page. So, the platform seems to be a good choice. But the more time we spend on our research, the more suspicious we become. On the internet, we found good reports. However, we also found some negative reviews. Some former users had a bad experience and even mention of a scam.

It seems that some profiles in the members´ pool are fake. Also, we found some hints about a fake chat. That would mean that fake chat operators control fake profiles. But the legal proof is missing. In the legal information, fake operators or fictional profiles are not mentioned. However, we found a statement that sounds suspicious. The operator mentions that users might receive messages for promotion, and sample reviews written by other members. In the end, we are not completely sure what kind of promotion that might include. We advise all users to be careful.

By creating an account, you agree to receive certain communications in connection with Loveawake. These may include, but are not limited to, updates during the review approval process, messages about reviews being written by other users, promotional material from LA Media, Inc. and account update reports.

We cannot recommend this site

We must mention the lack of information about the operator. In the legal information, we found the company’s name. But we were not able to find further information about their location. This is worrying, especially because costs will occur for a subscription. After the registration, a user will need a premium-membership. A rip-off with a subscription trap seems unlikely, as the paid membership will not extend automatically. However, the operator wants you to pay money for a subscription but does not provide details about where they are based.

On the internet, we found mixed reviews. Some former users were happy with the service of the site. Others mention fake messages and fake profiles. According to the information on the internet, this site can be used safely. But we cannot recommend it, because of information about receiving promotional messages and missing information about the operator. We share the opinion of former users. There are much safer and more reliable online dating portals available.

The conclusion from our LoveAwake.com review

LoveAwake.com is not a reliable choice. On the internet, we found positive and negative reports. Some former users mention a scam with fake chat. However, tangible proof for that is missing. As we see it, this website is not reliable. One example is the missing imprint. We know the name of the operator, but not the company’s location.

Let us know your LoveAwake.com experience in the comments as well.