The result of our Iizie.com review: Our test on Iizie.com turned out to be an insufficient dating website. 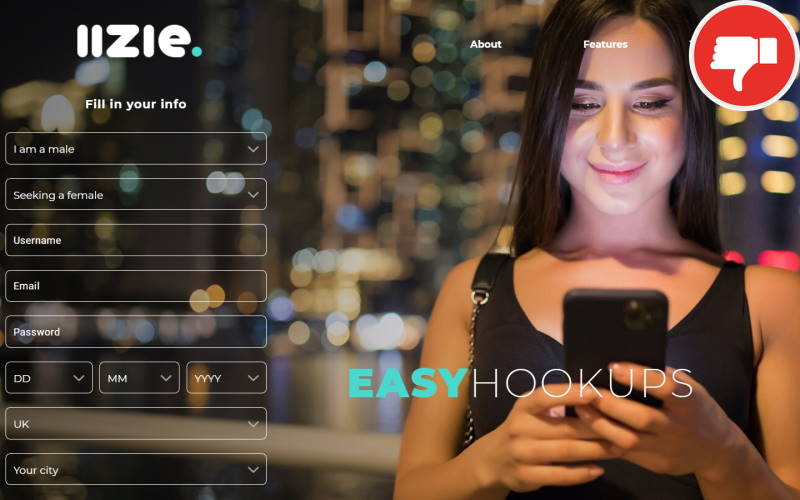 Iizie.com offers free registration. That is the only information that we found on the landing page of the online dating portal. Of course, this does not appear reliable, as we see it. So, we did some research on the internet and found many negative reviews. Former users had a bad experience and pointed out that this website is a scam.

We checked the legal information and found some proof. This website is filled with fictional profiles that are controlled by fake operators. Fake operators control the fake profiles to entertain you, as the operator explains. From our point of view, the fake operators are used to increase the income of the operator. In the end, it is a cheeky rip-off. The company Meet Us Media Ltd is the operator of the site.

Scroll down to read the details of our Iizie.com review.

Details on the Iizie.com review

The online dating portal Iizie.com advertises with free registration. More information about the site and its service is not provided. Well, that does not appear very reliable. In general, the less transparent a website is, the more risky it is likely to be. Now, we did some research on the internet and found a lot of negative reviews. Former users were not satisfied at all and point out a rip-off with a fake chat.

It seems that all profiles on the site are fake and show fictional people. Well, these are accusations that need to be proven. So, we checked the legal information.

The Company operates system profiles (i.e. profiles connected to Accounts which have been created by the Company and which are either operated by contractors of the Company who impersonate the persons portrayed in such profiles or by a system designed to interact with users) and expressly reserves the right to chat with users through such system profiles in order to enhance the users’ entertainment experience.

This site is not worth your time and money

Further to the reviews we found on the internet, the scam starts right after the registration. Then, a new member will receive many messages from other profiles. As we said, fake operators will not note that they are chat moderators. Plus, they will make the first approach and actively animate users to a conversation. Additionally, costs will occur to reply. Coins are needed to send messages which can only reach a fake operator.

So, fake operators try to increase the income of the operator by generating messages. The operator of the site is Meet Us Media Ltd which is based in Nicosia, Cyprus.

The conclusion from our Iizie.com review

The online dating website Iizie.com is a scam with a fake chat. In the members´ pool are fake profiles only. Those fake profiles show fictional people with whom a date in real life is impossible. With regard to reviews, all profiles are fake but not marked as such. Also, fake operators control the fake profiles to animate users to a paid chat, but they will not identify as moderators.

Let us know your Iizie.com experience in the comments as well.