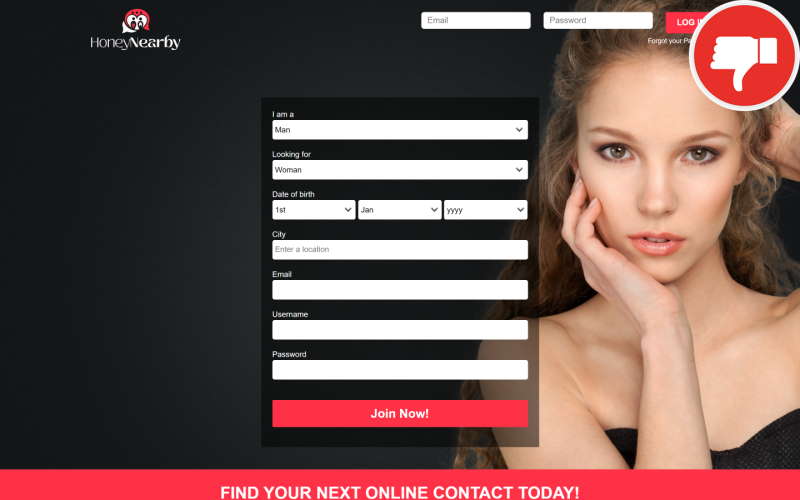 HoneyNearby.com claims to be a legit online dating portal. But we did some research on the internet. We found a lot of negative reviews from former users. Regarding their experience, all profiles on this site are fake. A fake profile shows a fictional person. Fake chat operators control these fake profiles. Now, fake profiles are not marked as such. Additionally, a fake chat operator will not identify as a fictional person while chatting. This website is a scam.

The goal of moderation is to increase the income of the operator. The operator of the website is Skyloop Digital Ltd, who is based in London, UK. This company has a bad reputation on the internet. There is one positive aspect to mention. On the landing page, a short note is provided, which is about fictitious profiles that are used for entertainment. But this note does not explain the full scale of the moderation. As we see it, this platform is a cheeky rip-off.

Scroll down to read the details of our HoneyNearby.com review.

Details on the HoneyNearby.com review

HoneyNearby.com makes a good impression. On the landing page, we see a huge selection of profiles. This website seems to have countless members. Also, the registration is free. In general, the website appears to be a promising choice. But, it is all a cheeky trick. The profiles on the website are fake. On the landing page, we found a short note about fictitious profiles. We read about the entertainment purpose of these fictitious profiles. This note is the only positive aspect to mention in our review. But this is not enough by far. This website is still a rip-off.

The note does not explain that all profiles are fake. Also, entertainment stands for moderation. As a synonym, it is used to describe a moderated chat, which is a fake chat. The goal of moderation is not the users´ entertainment. The actual goal is to increase the income of the operator. The operator of the portal is Skyloop Digital Ltd, who are based in London, United Kingdom. We did some research on the internet. This company has a terrible reputation. We found many negative reviews. It appears that this is not their only scam website, but just one of many.

The following is stated in the Terms and Conditions

Meetings are not possible

We know the tricks of the operator. Also, we have had some experience with this company. It starts right after registration. Then, a new member will receive many messages. Those messages come from fake chat operators. They will animate users into a chat, but they will not identify as a fictional person. Their fake profiles are not specially marked as well. So, users do not suspect the fake chat and are willing to pay to send messages.

After the free registration, costs will ensue for credits. Fake chat operators try to generate as many messages as possible to increase the operator’s income.

The conclusion from our HoneyNearby.com review

HoneyNearby.com is a rip-off with a fake chat. The profiles on this site are fake. That is noted on the landing page. But this note is well-hidden. There it is mentioned that the website is for entertainment. Entertainment is a synonym for a fake chat. This website is a cheeky scam. Fake chat operators control the fake profiles on the site. They will animate users into a paid chat, but they will not mention anything about moderation.

Let us know your HoneyNearby.com experience in the comments as well.