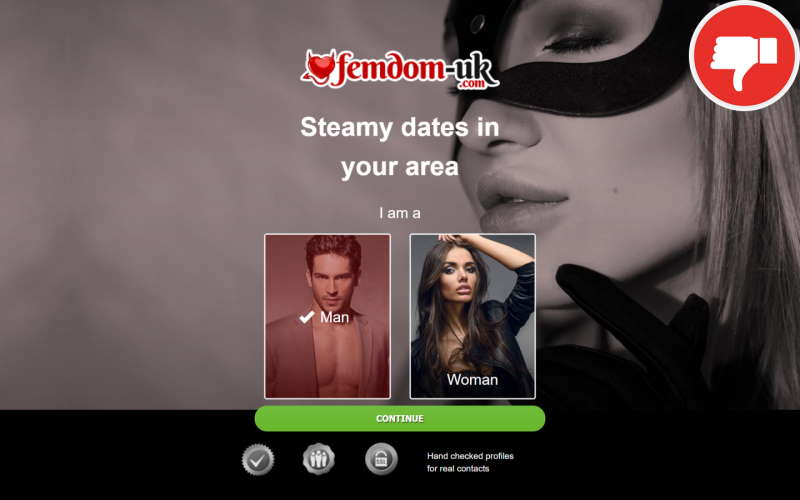 FemDom-uk.com offers free registration, but then high costs will occur. Misleading advertising is not the worst part of this online dating portal. It is a cheeky scam. Fake messages and a lack of data protection are used to lure users into a subscription trap. After the registration, new profiles will be shared on a huge dating network. The company Date4Friend AG based in Zug, in Switzerland is the operator of the network.

Also, every profile will send automated messages to other members. So, new users on every site in the dating network will be stimulated into a chat. To read and send messages, a premium-membership is needed. This membership will extend automatically and will end in a subscription rip-off. On the internet, we found many negative reviews. Former users made a terrible experience.

Scroll down to read the details of our FemDom-uk.com review.

Details on the FemDom-uk.com review

FemDom-uk.com appears to be a promising choice. But this site is a bad choice, according to reviews on the internet. Former users had a bad experience and claim it is a cheeky scam. This portal lacks data protection. After the registration, your profile will be shared on a huge dating network. New members must agree to that feature during registration. They must also agree to automated messages. Both of those features are used to lure users into a subscription trap afterwards. The automated messages have the same effect as a fake chat.

On this site, fake chat operators are not necessary. The automated messages take their role. However, the purpose remains the same. New members will be animated to purchase a premium-membership that will end in a trap. According to reviews on the internet, a new member will receive many messages. Those are fake messages from profiles that were created on other sites in the network. To read the messages and reply to them, a costly premium-membership is needed. Of course, this subscription is not worth the price. There is no chance of meeting real people on this platform.

The fake messages animate new members to make a purchase. A premium-membership is not just expensive, but useless. That is not all. The subscription will extend automatically, if the user does not terminate the subscription in time. Actually, that is nothing bad. But here, the operator makes the termination difficult. Terminations will be ignored or simply declined. The operator of the site is Date4Friend AG. This company is based in Zug, in Switzerland. They have a terrible reputation. We found many negative reviews about this operator on the internet. Former users express a warning about the cheeky rip-off.

The conclusion from our FemDom-uk.com review

FemDom-uk.com is a rip-off with a subscription trap. A premium-membership is needed to read and send messages. But this will extend automatically and end in a trap, as the operator makes the termination almost impossible. The chances of meeting real people are low to zero. This site has a terrible reputation, and so has the operator.

Let us know your FemDom-uk.com experience in the comments as well.