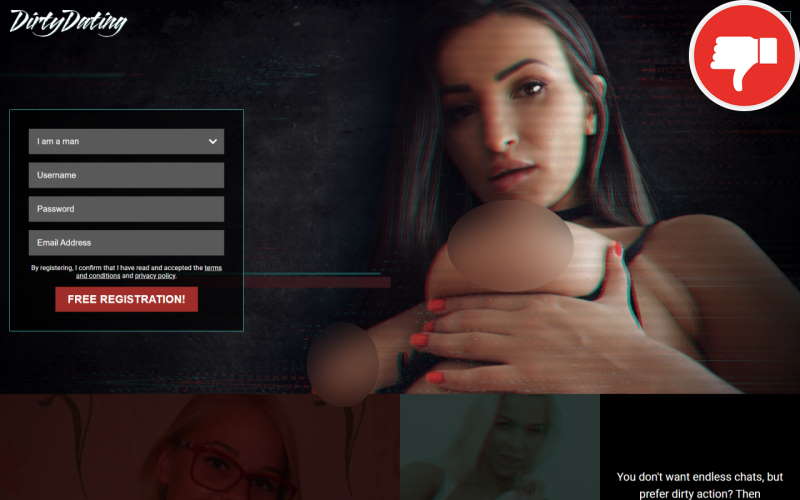 According to reviews on the internet, it starts right after the registration. Then, a new member will receive many messages that come from fake chat operators. They lure members into a chat, but they will not identify as a fictional person. The purpose of moderation is to increase the income of the operator. That makes this site a rip-off. The operator of the platform is United Performance Ltd. This company is based in Mahé, in the Seychelles.

Scroll down to read the details of our DirtyDating.com review.

Details on the DirtyDating.com review

Do not register here

With every sent message, a user can only reach a chat moderator. But users do not know about this. They assume that the profiles on the site show real singles from the UK. But that is not the case. Additionally, the fake profiles are not marked as fictional content. A fake chat operator will not identify as a fictional person, either. In a nutshell, users are willing to pay a lot of money to chat as they do not expect a rip-off. Our review shows that there is a certain purpose to the moderated chat.

UP is also entitled to assign responsibility for performing its own services or portions thereof to third-party service providers or agents.

The chances of meeting real people here are extremely low. In fact, we assume that there is not one real match on this website. All profiles are fake and controlled by fake chat operators, to increase the income of the operator. As mentioned, a fake chat operator will not identify as a fictional person. That is a problem. But there is more to mention. According to the experience of former users, the operators take the first step.

On the internet, we found negative reviews about this site. Those reports explain how the rip-off works. After the registration, a new member will receive numerous messages. Those messages come from fake chat operators. They seduce users into a chat, according to the experience of former users. But they will not mention anything about moderation or their actual purpose. Because of that, users are willing to pay to send messages. The costs for credits that are needed to send messages are quite high, according to user reviews.

To delete your profile, please contact the customer support. Further information is provided in your profile settings.

The conclusion from our DirtyDating.com review

The online dating portal DirtyDating.com is a fake chat scam. The profiles are fake, and it is impossible to meet real people. All profiles are controlled by fake chat operators. They will animate new members into a chat, for which costs will occur. Users do not suspect a moderated chat and pay a lot of money to send messages. Users will only experience an expensive fake conversation with imaginary people.

Let us know your DirtyDating.com experience in the comments as well.