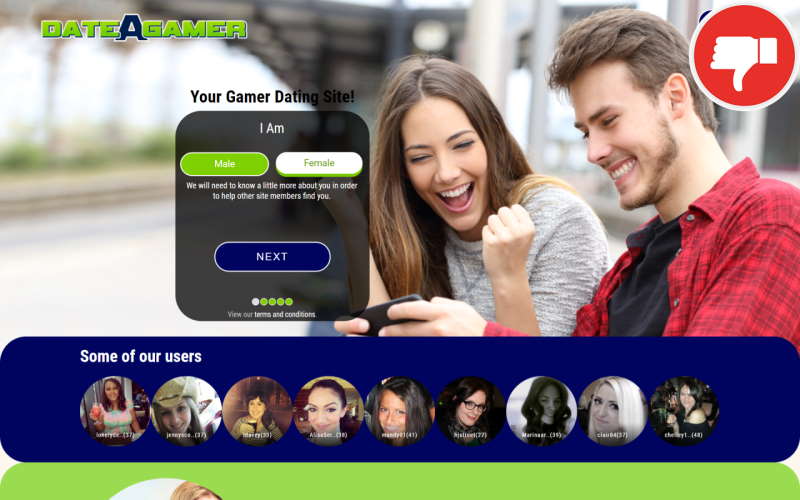 Date-A-Gamer.com may look like a normal online dating portal. But, we did some research on the internet. In the end, we concluded that it was a scam. We found reviews about a fake chat and a subscription trap. According to the experiences of former users, all profiles are fake and controlled by fake chat operators.

The operator of the site claims that they are employed for your entertainment. But, that is not true. Fake operators will animate new members to a chat, for which costs will occur. To get in touch with others, a paid membership is needed. A trial membership will be offered, which is a subscription rip-off. The operator of the site is Sensate Inc, which are based in Florida, USA.

Scroll down to read the details of our Date-A-Gamer.com review.

Details on the Date-A-Gamer.com review

Date-A-Gamer.com has got a modern design. On the landing page, we see an image of a couple playing games on a mobile phone. It appears that the target group of the site is young people who like video games. That is noted on the landing page as well. There we found some general information about the site and its offer.

With regard to this information, the website appears to have a lot of members. Also, the site’s community is chatty friendly and welcoming. Plus, many female users are registered here as well. This means the chances of finding a match must be high.

Date-A-Gamer.com may offer a solid service. But, the information on the landing page is misleading and wrong. This online dating portal is nothing but a scam. The profiles on the landing page are fake and show fictitious people. It is not possible to meet real people here. This site is for entertainment only. Now, entertainment is an often-used synonym for a fake chat. This way, moderation can be noted but not called by its name. In general, a dating portal is not for entertainment. It should be a service that connects people accurately. That is not the case here.

On this site, you will be entertained by fake chat operators. They will get in touch with you right after registration is completed. Also, the fake operators will make the first step in the conversation. With regard to reviews on the internet, the virtual post box will fill with messages in just a short time. Those messages come from fake operators, but they will not advertise that. So, a fake chat operator will not identify as a fictional person. Their fake profiles are not marked as such, either. Plus, the operator notes fictitious profiles with synonyms as well.

By using this website, you acknowledge that any User profiles, messages, and communication may not be genuine.

This is a pricey entertainment service

Whilst not knowing that all chat partners are fake operators that use fake profiles, users will pay a premium membership which is needed to chat. First of all, that is enough to call this site a fake chat scam. But, that is not all. The subscription for a premium membership will extend automatically if users do not cancel it in time. This is not necessarily wrong, in general. Here, it is a cheeky trap. Actually, the trial membership is the trap.

The conclusion from our Date-A-Gamer.com review

Date-A-Gamer.com is a rip-off with a fake chat and a subscription trap. The profiles of the site are fake and controlled by fake operators. They will animate users to a chat, for which costs will occur. Users need a premium membership to read and send messages. A trial membership is offered as well, which is the actual trap. It will extend without any chance of avoidance.

Let us know your Date-A-Gamer.com experience in the comments as well.