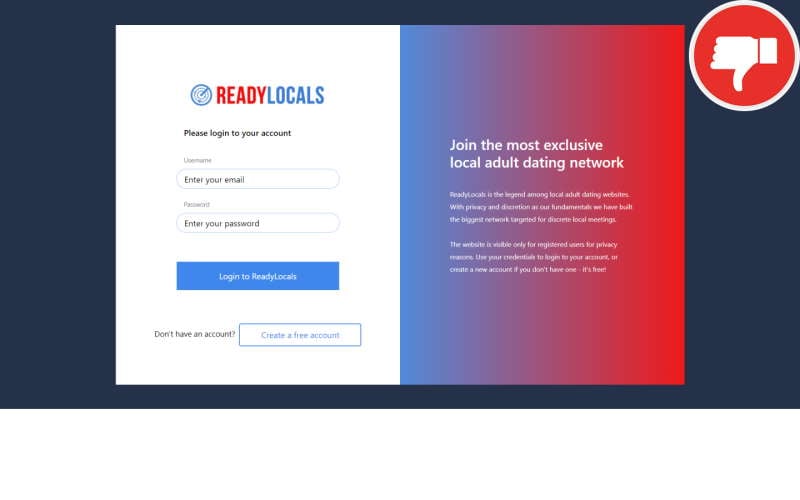 The dating site ReadyLocals.com advertises with a free registration and claims to be the most exclusive local adult dating network. The operator wants us to sign up right away, but if you want to create an account on this profile, you agree to sign up for a trial membership on a different dating site that transforms into a paid subscription after just two days. This is problematic, since the information concerning this trial membership is well hidden.

ReadyLocals.com is operated by Glondon Limited from Nicosia. The company promises that members of the dating site won’t ever have to pay any money for their membership. This could very well be true, but the statement is very misleading and doesn’t mention the costs that arise when you miss the cancellation period for the hidden membership on the other site. We have encountered a few users who share their negative experiences with the operator online.

Scroll down to read the details of our ReadyLocals.com review.

Details on the ReadyLocals.com review

The lack of photos on the landing page is irritating, at least there is a short introduction text at the bottom of the page. Apparently, this site comes with a giant network and a legendary reputation. Since user reviews for ReadyLocals.com are nowhere to find, the claims made here don’t appear to be legit.

We are supposed to register and become a member of the community right away. As part of our research for this review, we decide to sign up. After some time, we start to feel like the operator wants to lead us right into an expensive subscription trap.

While we try to create an account on ReadyLocals.com, we are constantly being told that by signing up we are granted a free lifelong membership. There is a reason this promise is made here. It seems like there are no hidden costs that arise when becoming a member on this site, but this is however not completely true.

If you read what is stated in the fine print, you find out that by signing up on this site, you also sign up for a trial membership on a dating service referred to as “The Right Time For Loving”, which is why this is a scam.

Two free memberships at once seem like a great deal. This trial membership requires a cancellation within two days, otherwise it turns into a paid subscription of around 34 pounds per month. All the promises made about ReadyLocals.com and the free membership are a clever tool to make you end up in a subscription trap.

The dating site is operated by Glondon Limited, a scam company that is based in Nicosia on Cyprus. The operator based on the island in the Mediterranean Sea is not that well known but has already received several reviews by customers who complain about the exact same kind of rip-off.

The conclusion from our ReadyLocals.com review

Don’t trust all the claims and promises made on ReadyLocals.com. While using the site can be free of charge, signing up on it can get more expensive than you might expect. The operator makes you sign up for a trial membership, without you even knowing it. If this works, you have to pay for an expensive subscription on a dating site you never wanted to use in the first place. This site is nothing but a rip-off.

Let us know your ReadyLocals.com experience in the comments as well.