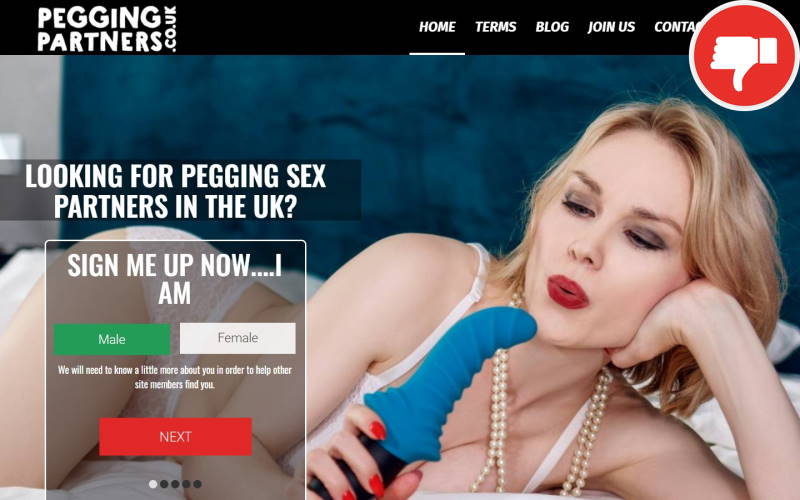 By the way, we had some experience with this company already. In general, it was always bad. This website is part of a huge scam network. The profiles on the landing page and in the members´ pool are fake. Those fake profiles show fictional people and are controlled by fake operators. They stimulate new users to buy a premium-membership which will end in a trap.

Scroll down to read the details of our PeggingPartners.co.uk review.

Details on the PeggingPartners.co.uk review

The online dating website PeggingPartners.co.uk might appear like a good choice, at first. But, the reputation of the site is bad on the internet. While doing our research, we found many negative reviews about the portal and its operator. According to the reports, the profiles of the site are fake. Also, the fake profiles seem to be managed by fake operators. They stimulate users to a chat for which costs will occur for a paid membership. But, the user does not know about moderation. After we checked the terms and conditions, we know that this portal is for entertainment only.

Entertainment might sound like a normal thing. But, a dating portal is not for entertainment. It is a service that connects potential matches and arranges real dates. Here, that is not the case. The profiles are fictional and controlled by fake operators. Their purpose is not your entertainment, but to lure you into a subscription rip off. Costs will occur for a premium-membership which is quite expensive. Also, any subscription on this platform will extend automatically, if it is not cancelled in time. Here, that is used as a trap. Fake operators animate new users to make a purchase.

By using this Website you acknowledge that any User profiles, messages and communication may not be genuine.

Do not buy the subscription

According to the reviews on the internet, the fake operators make the first step. But, they will not identify as a fictional person. Also, a fake profile is not marked as such. So, the user does not know about moderation. So, it is a fake chat scam. The actual subscription rip off is the trial membership. It is an alternative membership with low costs. But, it can not be cancelled in time and will extend to a normal subscription. There is no chance to avoid that. The operator of the site is Desdemona Ltd which is based in Dublin, Ireland.

The conclusion from our PeggingPartners.co.uk review

PeggingPartners.co.uk is a rip off with a fake chat and a subscription trap. The profiles in the members´ pool are fake and show fictional people. It is not possible to meet a real person here. Fake operators control the fictional profiles and animate new users to buy a premium-membership. A trial membership will be offered which can not be cancelled in time and will extend automatically.

Let us know your PeggingPartners.co.uk experience in the comments as well.