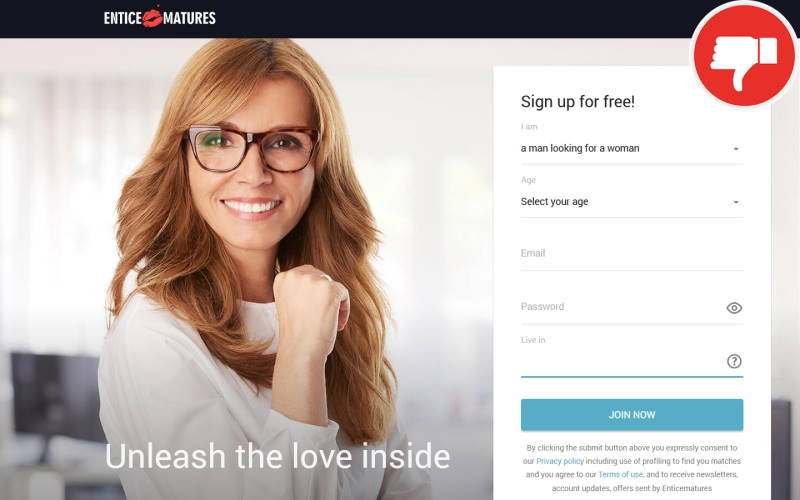 EnticeMatures.com offers free registration for women and men. However, after the registration, high costs will occur for the use of the site. We did some research on the internet and found many negative reviews. In general, the experience of former users was not good.

We read about fictional profiles and a fake chat scam. According to that information, the profiles are controlled by fake chat operators who lure new users into a chat. However, proof of a fake chat is missing. But we found enough hints to call this website a subscription trap. The operator of the site is Porticato Media Ltd, who are based in London, in the UK. This company is well-known for that kind of rip-off.

Scroll down to read the details of our EnticeMatures.com review.

Details on the EnticeMatures.com review

The online dating platform EnticeMatures.com claims to be a legit website. It seems that the portal has many members. There are some general details about the site on the landing page. According to that information, the chance of success is high. Also, the main target group are young men who are looking for older women. So, this is a kind of mature dating website. The site appears to be trustworthy. The registration is free and done in just a few steps, so you can be an active member in no time.

Misleading information on the landing page

At first sight, EnticeMatures.com seems to be a solid choice. But we did some research on the internet and saw the real face of this platform. This online dating portal is a bad choice. We found reviews from former users who mention a fake chat and a subscription trap. According to their experience, the profiles in the members´ pool are fake and controlled by fake chat operators. The goal of moderation is to persuade new members to make a purchase. Costs will occur soon after the registration for an expensive premium-membership. This membership will extend automatically.

We must point out that a proof of a fake chat is missing. In the legal information, the operator does not mention fake chat operators or fictional profiles. So, we can only report that many former users had the same experience. The operator of this site is well-known on the internet. We know this company as well. We have reported about other sites from them in the past. This website might not be a fake chat, but it is a cheeky subscription rip-off. The scam is that the cheap trial membership which will renew to a premium-membership.

After the registration, a new member will receive many messages. This appears to be a fake chat. But there is no evidence for that. We also found reviews which mention that messages will delete within a certain time limit. That appears to be part of the cheeky scam. To read and send messages, a premium-membership is needed. A cheap three-day trial membership is offered. That membership must be cancelled within the deadline, but that is impossible. The deadline for termination is 72 hours. So, the deadline will be missed, and the trial membership will renew automatically.

We did some research and found a lot of negative reviews about this site. Most former users had a poor experience and complained about this platform. They explain how the scam works step by step. It all starts with misleading advertising and will end in a subscription trap. Altogether, this site has a bad reputation. The operator’s reputation is even worse.

The conclusion from our EnticeMatures.com review

EnticeMatures.com is a rip-off with a subscription trap. A cheap trial membership will be offered which cannot be terminated in time. Because of that, it will extend automatically to a normal premium-membership with high costs. We also found many reviews about a fake chat for which legal proof is missing.

Let us know your EnticeMatures.com experience in the comments as well.